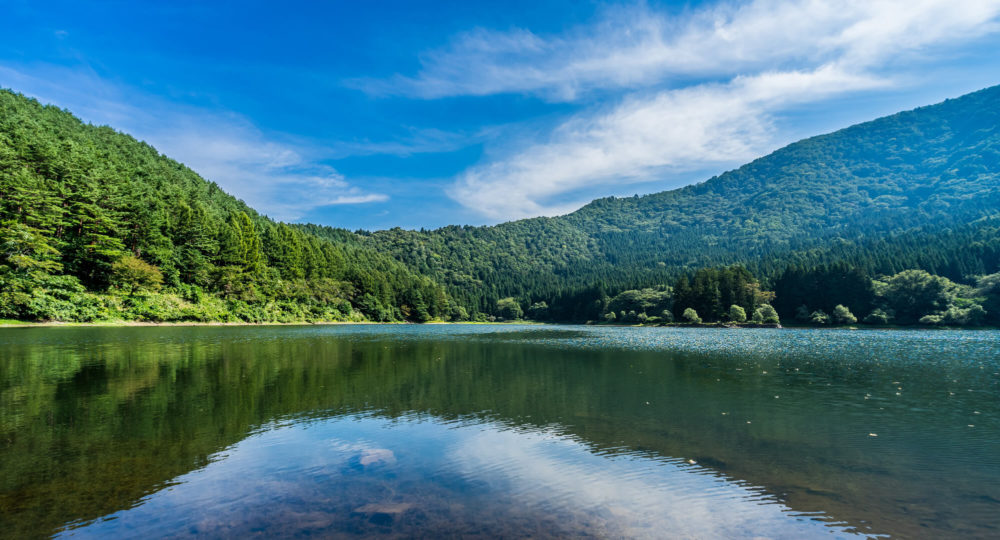 The small body of water called “Saotome-no-ike” or “Rice-planting Maidens’ Pond” was a depression in the mountains where water collected, but during the Edo Period it was enlarged as an agricultural reservoir to serve as a water source for the Iiyama Domain’s new field development. Up to the present day it has remained an important source of water for the Kosuge district, and it continues to irrigate about 24 hectares (60 acres) of farmland.
Long ago, there was a lake in the Kosuge district called Lake Nanryu (South Dragon), and legend has it a dragon lived in it. When the water in Lake Nanryu grew shallow, that dragon moved to a nearby lotus pond, and when the pond in turn grew shallow the story goes that it went to live in “Saotome-no-ike”—the present Lake Hokuryu (North Dragon). When it did, the story says, the marks left by the dragon dragging its body became the canal that links the “Saotome-no-ike” and the community of Kosuge.
In late April, the canola flowers blossom gorgeously by the lakeshore, their vivid yellow and the surrounding fresh green growth reflecting on the lake’s surface in a contrast people find captivating.
The legend that the carp who live in the lake were in love with the rice-planting maidens, and the fact that the lake is heart-shaped, has given rise to a minor boom in popularity as a “lake for good luck in love.”